Certainly one of the highlights of the summer was my August 11th overnight stopover in Grasslands National Park, in southernmost Saskatchewan. It was my first stop on an Edmonton-to-Kingston (and back) road adventure.

Butted up against the Saskatchewan-Montana border, Grasslands is comprised of two separate blocks (East and West) which protect significantly large remnant tracts of mixed-grass prairie, a once vast North American ecotope. The park hosts a high number of species at risk, among them Greater Short-horned Lizard, Yellow-bellied Racer, Greater Sage Grouse, Black-tailed Prairie Dog and re-introduced populations of Swift Fox and Black-footed Ferret. 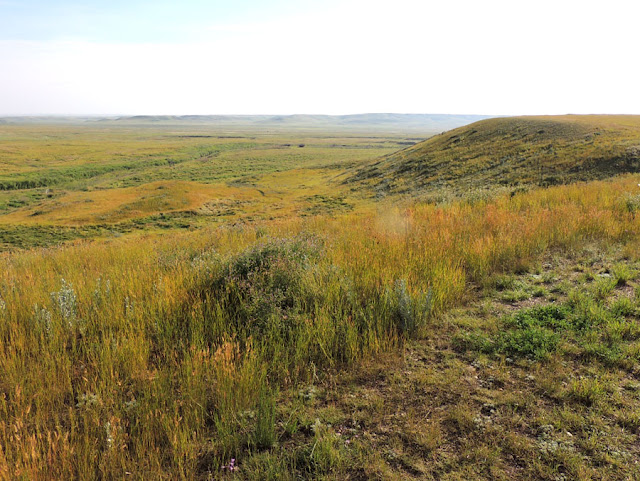 My stay was short and sweet. I accessed the west block through the small town of Val Marie where the friendly and knowledgable Parks Canada interpretive staff got me oriented to the area. The tiny town site is quaint and quiet. In the middle of the day, Common Nighthawks were hawking for insects at eye level along the main street. 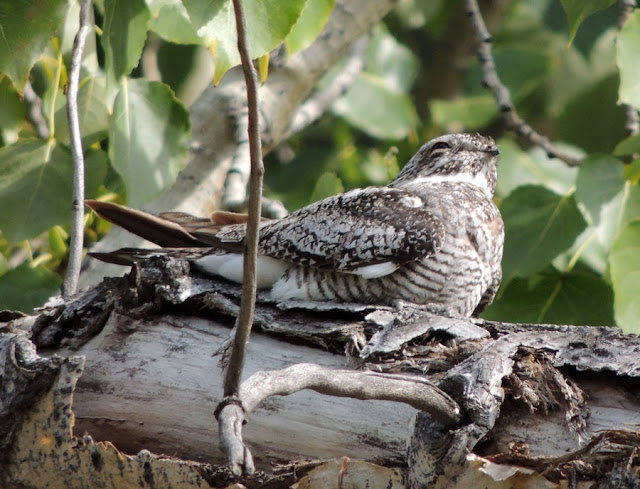 In the late afternoon I drove from Val Marie along the Ecotour Route to the Frenchman Valley campground. Along the way I encountered scads of songbirds. Particularly numerous were flocks of Vesper Sparrows, Chestnut-collared Longspurs and Lark Buntings. A dark phased Swainson's Hawk didn't mind me stopping to snap a photo. 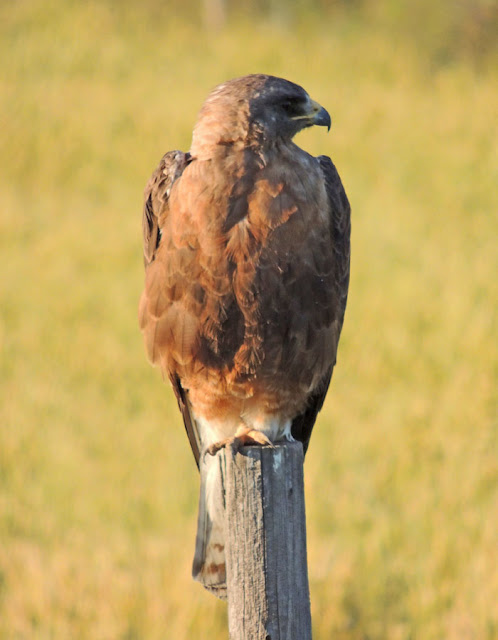 The thinly populated Frenchman Valley campground perfectly suited our needs. Our dog, Molly, found a playmate in an adjacent site - just what she needed after ten or so hours on the road. The limitless prairie landscape and a quiet punctuated only now-and-then by meadowlark song were just fine by me. We slept well. 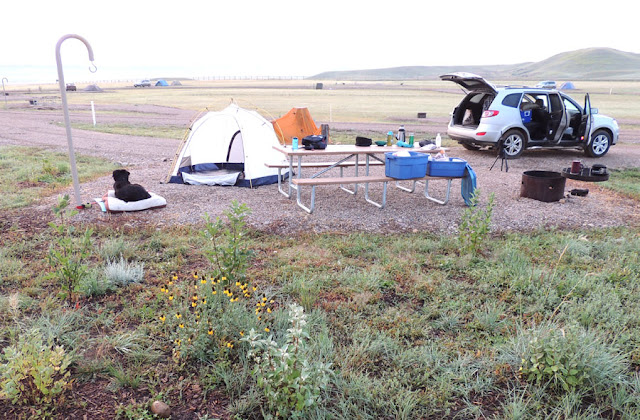 We awoke to a brief and rich pre-dawn chorus of birds, perhaps surprising given the lateness of the breeding season. Just outside the tent, recently fledged Western Meadowlarks and Lark Buntings begged food from their parents. 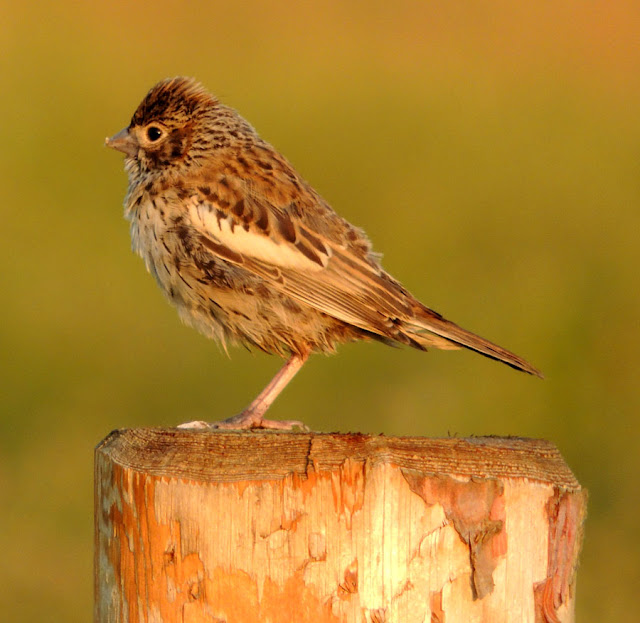 I packed up the car and then backtracked along the Ecotour Route through several Black-tailed Prairie Dog towns, where many of the park's more charismatic birds and mammals can be easily seen from the roadway. The Prairie Dogs are particularly noteworthy as Grasslands is home to the only wild population of the species in Canada. 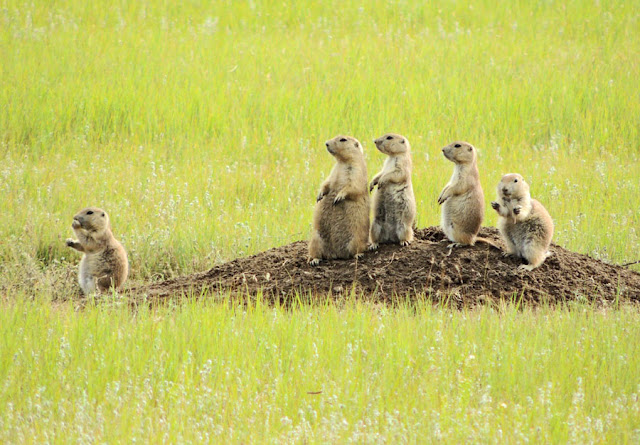 There was much activity in the area. High overhead, male Sprague's Pipits serenaded the prairie with their otherworldly cascade of descending notes. Earthbound songsters included many male Baird's Sparrows which seemed more numerous and more easily observed than I found them to be in Alberta. 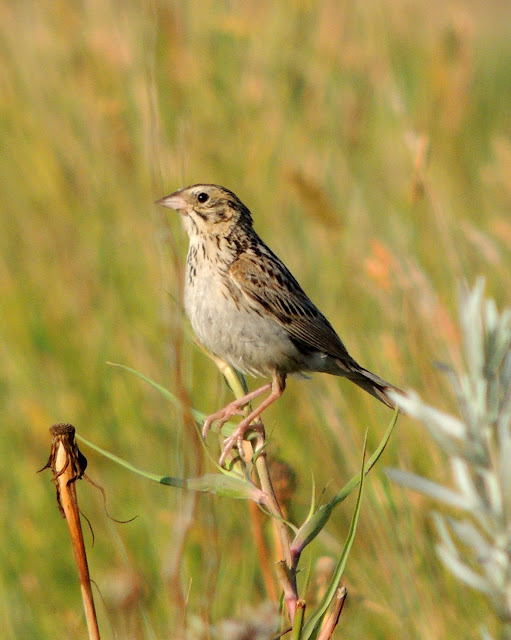 Also notable in the dogtown area were an overflying Ferruginous Hawk, at least seven Burrowing Owls, and active pair of American Badgers. 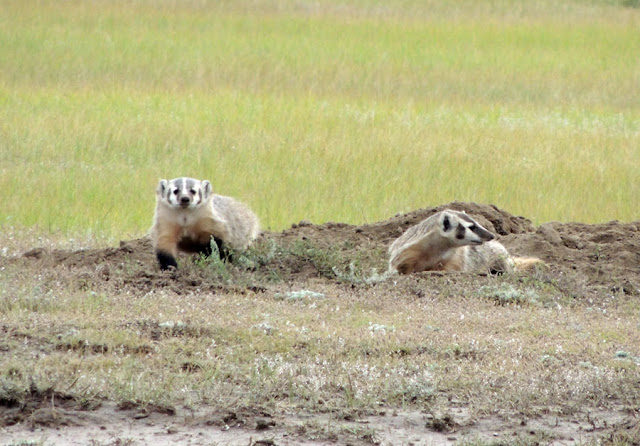 I was sorry to leave dog town after such a short visit but I had to push on. 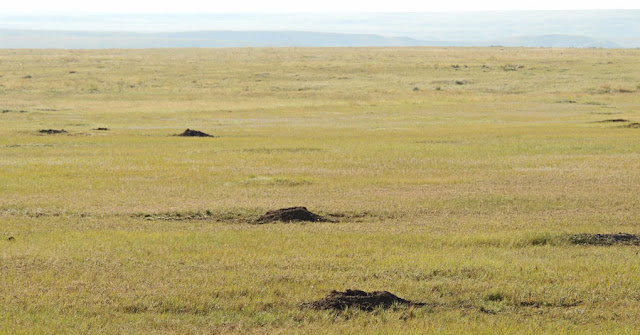 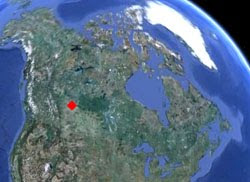